If you are a traveler or just come to Karaganda because of business, you certainly want to find in the city where you can not only delicious to eat, but to have a good time. But if you come as a guest to your relatives, the Kazakh hospitality will not leave you hungry.

A tasty meal in the relaxing surroundings is in the Georgian restaurant "My Tbilisi" on Avenue N. Abdirova 23/2 or "Art-cafe" next door on N. Abdirova 24/4. On the same Avenue is the tavern "Medved" with a colorful interior and a decent kitchen. Strolling along the Boulevard of Peace there is café "Mate" where you are waiting for unusual drinks and shelving books or in the restaurant Pivovaroff". Beer lovers will appreciate the latter institution. By the way, in Karaganda the culture of beer is developed. It produces the favorite "Karaganda" beer, which is one of the best in the CIS. For lovers of nightlife, discos and karaoke bars like in "Empire club", "Plyaskin" and lounge bar "Arista". These cafes are mostly concentrated in the new district of the city, where a lot of young people live. But if you want to escape from city restaurants in close company, follow the city in the village of Ushtobe in bathing and entertainment complex "Baiterek Resort".

There is a great variety restaurants, cafes, clubs, bars and canteens in Karaganda. Visit any suitable place or ask the locals, and they'll tell you the whole truth about food and entertainment in the city. Not to mention that the Karaganda is tha country's shopping center. Residents of Karaganda, Akmola and Pavlodar region come to Karaganda to buy new things and clothes. The range of shopping malls and markets are wide, the prices are reasonable, and there is always the possibility to bargain. In the old city centre are the main shopping centers - Central Department store, Abzal and CityMall. But this is not the only outlets of the city. For outerwear should go, for example, in "Tair" shopping center. In shopping centers in Karaganda you can not only update your wardrobe, but also go to the cinema, eat in fast-food outlets and restaurants, entertain the kids. 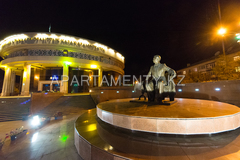 It's the long-awaited weekend and you decided to get together with friends to relax. Where to eat out and spend time in pleasant company in Karaganda? TOP-10 cafés, restaurants, night clubs Karaganda on our website, as well as the ability to rent an apartment in Karaganda in your desired area and to book a room in hotels of Karaganda.

Read more about entertainment of Karaganda 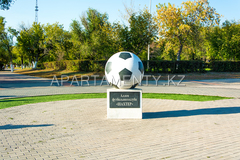 Karaganda - is not only a mining town, but also sports. People here really like hockey. On the "Karaganda-arena", which is the home of the hockey club "Saryarka", is performed many different activities. After discovery and exploration of the coal basin in the Karaganda formed a football team "Shakhter". Boxing holds a special place in life, not only for Karaganda, but for every citizen of Kazakhstan. Karaganda is home to such famous athletes as Serik Sapiev and Gennadiy Golovkin.

Read more about sports in Karaganda